Children of the Future International (CFI) is a 501(c)3 non-profit international organization dedicated to serving, empowering and education children of all communities through entertainment.

So many children today do not know their own values and where they belong. They need to be a part of or belong to something in order to feel loved and accepted in society. Not knowing that they have the right to be in this world and craving  attention very often leads them to become part of the wrong group.

King Nat Jr. and Helen A. Q. Mankaa, goodwill ambassadors of African culture, traditions, and customs together with a group of educators, have devoted their love, energy and time to develop an education program for children which teaches them not only about different cultural diversities, traditions and customs, but also strengthens their self esteem and interest on creation instead of destruction; love instead of hatred.

Our children are 100% our future. It is important to keep them away from the streets, violence, drugs and all the negative things they are constantly surrounded by. Therefore we have to educate them in many of the subjects they will encounter in the future. With this knowledge, they will not be so intimidated when faced with adversity.

The program is an educational performance playing, while King Nat Jr. and his group of educators will take the children on a magical journey through different countries around the world.  These children will participate in traditional dances, play instruments, dress in national attires and help perform in events. A different country or continent will be chosen in each session and will be developed in three parts.

A. GEOGRAPHICAL AND HISTORICAL BACKGROUND

By looking at the map, we will specify a country’s location, climate zone, vegetation and the main events in it’s history.

Supported by pictures and videotapes, we will give an insight into the everyday life of a child in the selected area.

We will show the magic that makes every country unique by listening to traditional music and stories, looking at artwork, different customs and instruments.

This program is a constructive and positive way of educating children in a simplified way. Making it fun for children and opening up their mind to encourage different cultures, races and traditions which they are constantly surrounded by.

Each program is designed to last between forty-five minutes to one hour. Each group will consist of approximately twenty children. The size of the studio, center, class or club will be at least ten feet by ten feet. We will provide the authentic equipment, clothing, instruments, pictures and books for use during the session.

Children of the Future International

Children of the Future International (CFI) is presenting a cultural and educational program taped, aired and distributed by  Talking Drum “The African Voice” Television Show and produced by Abusaun Productions Int’l LLC (API).

*”Edutainment” is CFI’s unique combination of Education and Entertainment. 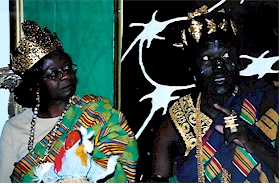 King Nat Jr., born in Africa, descendant of chiefs of the Akan people, is a goodwill ambassador of African culture, traditions and customs. He is a representative of kingdoms and chiefdoms of the Moronu people of Ivory Coast in West Africa.

King Nat Jr. and Helen Q. Mankaa and a group of educators have devoted their love, energy and time to develop an international children’s program which teaches children not only about different cultural diversities but in addition improve their self esteem on creation instead of destruction, love instead of hatred. King lives by his grandfather’s principles of: Innovation, creativity, originality and authenticity.

King has traveled extensively around the world by working with children for the past fifteen years, also defending humanitarian causes, spreading peace, tolerance, love, hope, unity and justice as a universal message along the way. King’s greatest passion is being involved with any historical project.

As children activist and advocate, King challenges people to embrace the world through non-violence and each human being to live in spiritual harmony no matter the color, race and culture. His latest work as international consultant with Walt Disney, has caused him to fall in love with Hollywood and the entertainment industry. He has declared Hollywood to his second home.

As spiritual leader and ruler, King works, lives and travels between Africa, Europe and the USA to keep in touch with his subjects. Also, to be active in their community, King Nat Jr. and Helen Q. Mankaa have founded CFI: Children of the Future International, a 501(c)3 non-profit international organization empowering and educating children through entertainment.

Third, AP: Abusuan Production LLC. A creative force as a production company interested in supporting a variety of film and television projects globally.

King Nat Jr. and Queen Mankaa are available to attend your next ceremony or special event, present awards, do private consultations, ride as VIP in parade, can perform two African rituals: 1) Call of the Ancestors and 2) Purification rite, and as speaker regarding any of the many African diverse culture, traditions and customs. 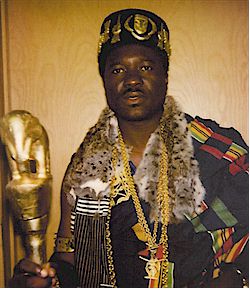 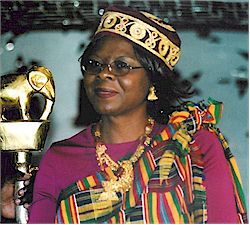